In this article we’ll see how to pass from the design of analog PID controllers for continuous-time systems to digital controllers, replacing operational amplifiers, resistors and capacitors with microcontrollers. Digital controllers are very compact, all the controller fits on a chip, including the A/D and the D/A converters, moreover, digital controllers are not affected by the aging of the components and don’t change their values with the temperature as analog components do. We’ll see how to apply the Z-transform, the equivalent of the Laplace transform, but for discrete-time systems, we’ll see how to identify the transfer function of a process and we’ll explain, with a step by step procedure, how to apply the theoretical knowledge learnt by examining an Proteus microcontroller based project, that uses its PWM output to control an oven ‘s temperature. The microcontroller has a 10 bit A/D converter. This procedure can be easily adapted with minimal adjustments to other processes to control.

9. Practical case of a temperature control system implemented with a microcontroller PIC and simulated with ISIS Proteus: Step by step explanation of how to apply the theoretical knowledge for implementing and simulating a PID controller.

Let’s examine now a graphical method for designing P.I.D. controllers. P.I.D. are Proportional-Integral-Derivative controllers and represent one of the techniques widely used to implement industrial control systems. Below the diagram block of a typical feedback system

There are several types of compensators, in series, in feedback and combinations of both. The compensator in series is the most used. A compensation system is required when the closed loop system is unstable, when the system is stable but the steady state error or the dynamic behavior doesn’t meet the required specifications, or both. To compensate the system we put before the process (in series) a controller whose transfer function is R(s), as you can see in the figure below

The generic transfer function introduced by the P.I.D. controller can be expressed as:

The simplest version is the proportional controller P. Its transfer function is:

This type of controller can improve the specification on the steady state error, but at the same time increases the bandwidth of the feedback system which means a faster response of the system to follow the reference but a decrease of the stability margins.  For a system with unitary feedback and open loop transfer function equal to F(s) the steady state error is:

multiplying by the gain Kp the new error will be

let’s see a practical example, the open loop transfer function of a unitary feedback system is 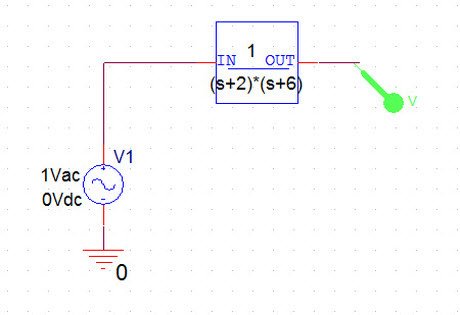 The bode plot of the transfer function is:

The specification on the system requires, for example, a steady state error equal to 3% and a phase margin PM of 50 degrees.It’s:

we have to impose

Plotting the compensated function we get

The phase corresponding to the crossing frequency is about -156 degrees

the specific on the phase margin can’t be satisfied with only the proportional compensation.