2. Simplified calculation of the transformer

What follows is a simplified example of design of the transformer switching power supplies both for Flyback and Forward type. The procedures and formulas are taken from Application Note contained in FERRITES and Accessories Siemens Matsushita Components AG published by 1994. The whole calculation procedure follows this guideline:

1. known  the type of the power supply, the demand for output power and the switching frequency, let’s choose the ferrite suitable (for example by consulting Table 1).

3. Determination of the overall thermal resistance of the transformer (see table 3 or via the (0.1))

4. Calculation of the maximum power loss dissipated from the transformer into its components, copper and ferrite, so that the temperature does not exceed the threshold identified in step 2.

PVtot:     Total power dissipated by the transformer in W

5. Identification of the minimum value of voltage applied at the input.

It is estimated that the losses calculated with (0.2) equally distributed between the ferrite and copper

PVtot:   Total power loss dissipated by the transformer in W

Pvfe:     Power loss in the ferrite in W

Pvcu:    Power lost in the copper in W

7. Calculation of power loss in specific volume for the ferrite choice.

waveform and with full cycle of magnetization (eg push-pull configuration). Therefore, to determine the losses with

square wave and single-ended configuration, you must use the correction factors (KForm, Khyst).

PVfe:     Power loss in the ferrite in KW

8. Determination of the maximum permitted flux delta Bmax as a function of the losses in the ferrite.

the maximum flux permitted. The following chart is an example relating to the material N67 Pv = f (B) for 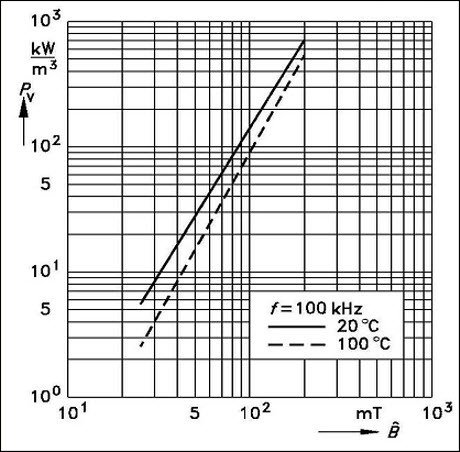 as alternative, with good approximation, we can use the following formula to calculate the value of maximum

B:       Maximum value of permitted induction in T

9. Calculation of the number of turns in the primary.

Nprim:     Number of turns in the primary

tonmax:   Maximum period of closure in us

10. Estimation of DC resistance of the primary winding.

in the documentation of the support (coil formers) relatively to the size of the ferrite used. The empirical

formula that allows us to estimate the resistance of the winding is:

11. Calculation of the number of secondary turns.

to the leads of the switching element (transistor or MOSFET) estimated VTR = 10V.

Vd:        estimated  voltage drop across the diode rectifier on output in V

Nprim:   Number of turns in the primary

VTR:     voltage drop across the switching element in V

AN:    sectional area of usable support  (from catalog) in mm^2

13. Calculation of the primary current of the transformer

The calculation of the primary current of the transformer is done with different procedures depending on the type of circuit.

Additional considerations for the type Flyback

14. Calculation of the maximum inductance of the primary winding.

Lprim_max: maximum Inductance to the primary in H

Iprim_rms:   Maximum current rms to the primary in A

15. Calculating the maximum value of the inductance factor AL.

Almax: Maximum value of the inductance factor in H/spire2

Lprim_max: maximum Inductance to the primary in H

Nprim: Number of turns in the primary

16. Determination of the value of the air gap.

The determination of the value of the air gap can be done by consulting the catalog. For each type of ferrite are indicated the electrical and mechanical parameters, in addition to the indication of the available half-cores with air gap and the relative values of AL obtainable.

As alternative, if the value of AL requested is not available, it is possible to approximate the required value by inserting shims between the half-cores until it reaches the value of air gap required. This value can be estimated with the following formula valid for materials N27, N67, N87 for 0.10 <s <3.00 mm:

s: value of the air gap in mm

Note: If the air gap is obtained with the introduction of shims between the two E half-cores, consider that the magnetic circuit is interrupted in two points, actually are three, but a point with section S (center column), and two with section S/2 (external columns), then the size of the shim to be inserted should be half that calculated.

17. Maximum power transferred by the transformer

Iprim_rms:  Maximum current rms to the primary in A

Lprim_max: Maximum Inductance to the primary in H